AN Egyptian seafarer suffering from severe abdominal pain was airlifted some 200km southeast of Finschhafen, Morobe, last Thursday for treatment at the Lae International Hospital.
Mohammed Alil, 34, was part of a crew on board an international vessel Patricia Oldendorff passing through PNG waters.
The vessel left China and was heading towards Australia.
It was during passage through Morobe and West New Britain towards the Solomon Sea that Alil experienced severe pain.
Health extension officer in charge of Manolos Aviation medevacs Pendek Sitong said the flight was necessary to save Alil’s life as the vessel was not equipped for the medical emergency.
The airlift took 50 minutes after the helicopter was able to locate the vessel.
“We landed on the vessel,” Pendek said.
“Onboard we diagnosed him as having kidney stones, and we treated him with painkillers before flying him to Lae and bringing him to Lae International Hospital (LIH).
“The doctors at LIH diagnosed him with a kidney infection and treated the patient accordingly.”
Pendek said the patient was discharged three days later.
Manolos has been conducting medevacs (medical evacuation) in Morobe and throughout the country since 2009.
She said there had been 95 medevacs so far this year – January to May.
Manalos chief executive officer Jürgen Ruh said picking up a patient at sea happened on average four times a year.
“It (airlifts at sea) makes up two per cent of our medevacs,” Ruh said.
“While it is not a frequent task, it is essential because the revenue from those flights helps us to purchase medicines and equipment for the medevacs for mothers in remote areas, who would not be able to afford the in-flight treatment.” 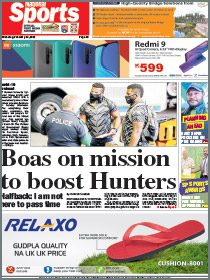