AUTONOMOUS Bougainville Government (ABG) President John Momis has thanked the national government for providing a barge to serve remote coastal areas of Bougainville.
Momis said this when welcoming and launching the barge mv Bougainville Atolls at the Buka wharf  last Saturday.
The vessel, 49m long, 9m wide and weighting 460 tonnes, arrived in Buka with 12 crew and 24 passengers after a three-day voyage from Port Moresby.
It also carried 180 tonnes of much needed materials for health and education infrastructure projects for Mortlock, Tasman, Carterets and Nissan islands.
These materials were also bound for the remote coastal areas of Tinputz, Buin and Torokina on the mainland.
Momis also said this service was believed to be the first major infrastructure development after the Bougainville crisis.
“Such assistance is necessary as people will benefit directly from it.
“Transport is very important for the development of communities.
“Without it, movement of goods and services to improve people’s daily livelihood will be impossible.
“The barge is symbolic for Bougainville as it will help to bring services and development to all the parts of Bougainville.”
Bougainville regional MP Fidelis Semoso said it was a big day for Bougainville after many years because at one time it was not in BDA’s list.
“It is also important for the national government and ABG as it is demonstrates that both governments are working together.
“It is not small money and is a major impact project to service remote areas.
“After a long time people in coastal areas
now have a solution to
their problem,” Semoso said.
“I don’t want to hear any more problems.”
North Bougainville MP Lauta Atoi said the ABG needed to develop the run-down cocoa and coconut plantations so that the barge would assist the agriculture industry in the region.
BDA got the barge as part of the transport infrastructural roll-out project for border maritime provinces. It is managed by PNG Maritime Transport Ltd (PNG­MTL) commercial arm of BDA. 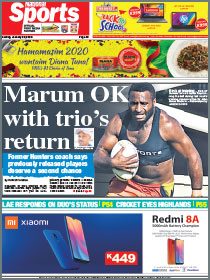 Do you agree with Govt's decision to send 100 soldiers to assist Aussie Bushfire restoration work?